Uncharted, the saga of the lost treasure.

When we bought our PS3, it came with a bunch of games, so we bought a bit more so we had a stock for at least one or two years. Between the games that the Play brought, was Uncharted 1 y 2, so we got the 3 as well to complete the saga.

Since I’m such a game addict, the deal was to only open a new game once I finished the previous one… and that’s what I have done. After finishing the 3 games I can say without any doubt… what a game!!!

Uncharted tells the story of Nathan Drake, a bounty hunter with a humor similar to  Mal Reynolds (Firefly), and with a climbing agility so awesome that spiderman looks like a baby. Each one of the 3 games tells the story of Nate and his friends, including treason, punches, machine guns and incredible landscapes. 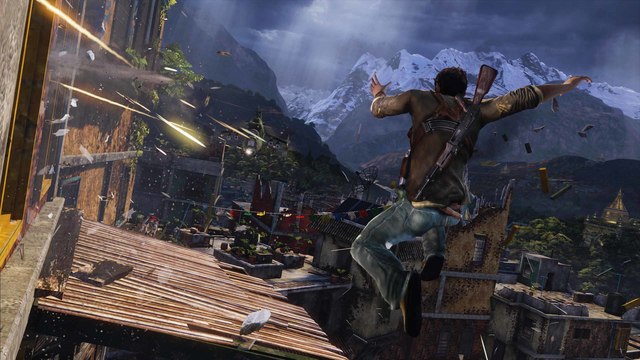 What i liked the most about the game was the evolution of this character handling and the landscapes. If you play them in sequence like I did, it will be like play the same game but better. First game has a nice movement range and a really cool story; second gives you much more movement freedom and has more guns…. but the 3rd, that’s insane… camera and scenarios change depending on your mental and physical condition. To resume, with the first game you will learn to crawl, second is to walk and third is to run!

I enjoy more games with a story, with treasures or items to search for, and where you can make choices that will change the final scenes, specially due my addiction. This way I can *accept* that a game has ended… this is the main reason why I don’t play any MMORPG… i would never stand up.

If you’re one of those who dream with Lara Croft and Indiana Jones, this is definitely a game for you. Now I will have to save for ages soI can buy a PS$, since seems that the 4th title will only be available for that console :(

Anyway, if you have games that you are bored of and would like to lend them to me so I can play them and make a review, let me know! Next review will be about Beyond: Two Souls, thx to Kamihacker :)

Next Post
Change logo for each language with mQtranslate