Yeap, like the instruction. This is a new AMC serie (same creators of The Walking Dead y Breaking Bad) that explores the first steps into the personal computer revolution. Story takes place at Texas, in 1983; and tells the story of Joe McMillan, an IBMex-employee who joins Cardiff after some weird stuff (which I still don’t know since I’m watching the serie right now), who joins Gordon Clark, a hardware specialist and Cameron Howe, a really dysfunctional programmer. This team will start the technological race for building the first portable computer that weights less than 10 pounds (4.5k).

For those who are close to technology since a while, Halt and Catch Fire will be a nice reminder of when everything needed to be hand made, when connecting a wire was more stressful than a 15 years old girl getting a pregnancy test, and when everyone dreamed with the glory of become the first ones into build a real portable computer. 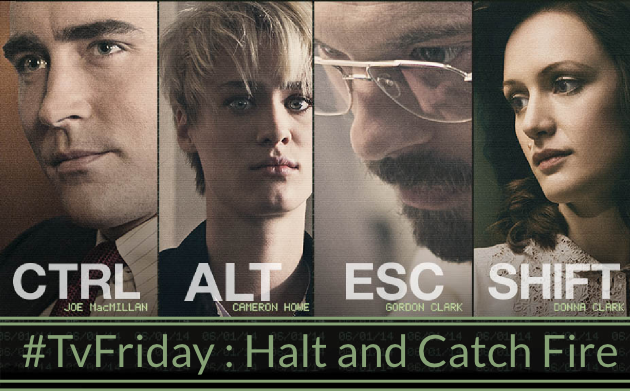 Acting are fantastic, just like computers. Is like getting back in time. Seems that everyone is crawling for the main characters, but who intrigues me the most is Dona Clark, the “common” housewife,with a tech-twist. She’s not only able to take care of the girls and the house, but also do some pretty crazy stuff with computers. Anyway, this serie is full with interesting characters, weird relations and a lot of old gadgets… just perfect.

Lets hope they remain that way and don’t end up turning into an abandon serie. Just like their slogan says “the battle for Ctrl begins”.

Previous Post
Podcasts are back!!! (but they need your help)

Next Post
Uncharted, the saga of the lost treasure.