Everyone knows I’m a photography addict, and even if I don’t consider myself a *photographer* I really try to capture moments, details and more with my camera. Even if you can’t believe it I have NEVER get inside a Photo booth… for real! so, today, and according to the todaysposting project (which is an awesome option if you need a bit of daily inspiration) we were called to do something that you find amusing… so, I know I have funny faces (or at least I think) so here is my version of a self-build Photo Booth.

A photo booth is a kiosk that contains an automated, usually coin-operated, camera and film processor. Traditionally photo booths contain a seat surrounded by a curtain of some sort to allow for some privacy and help avoid outside interference during the photo session. Once the payment is made, the photo booth take a series of photographs (modern booths may only take a single photograph and print out a series of identical pictures). The first known really working photographic machine was a product of the French inventor T. E. Enjalbert (March 1889). It was shown at the World Fair in Paris in 1889.

Now let me ask a geeky question… is there any linux app to create this fun sequences? I think I have a special request for that :D Any way, a bit of history and now a pic to *actually* make *your* night/morning happier :D Have a nice weekend! :P 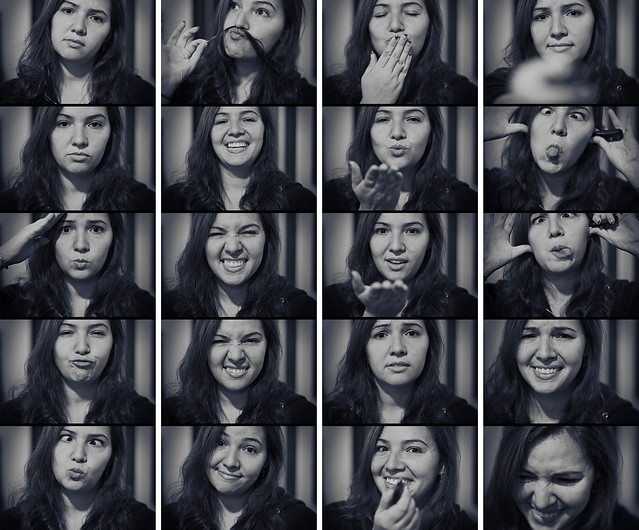 [:en]I’m a full-time designer, photographer and community people. I love to analyze how this interactive world works. I’m not a programmer, however that’s how I started. I have been in the field since 2005 and have been loving every minute of it.
I love to learn and teach what I know about FLOSS and I enjoy meeting new friends from all around the world.[:es]Soy una diseñadora, fotógrafa y persona comunitaria a tiempo completo. Adoro analizar como funciona el mundo en esta era tecnológica. No soy programadora, sin embargo, así fue como entré a este mundo. Trabajo en el campo desde 2005 y adoro cada minuto que ha pasado.
Me encanta aprender y enseñar lo que se sobre FLOSS y disfruto conociendo personas de todo el mundo.[:]