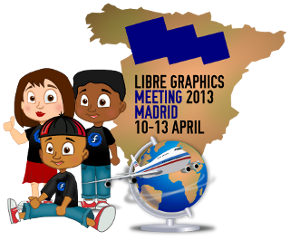 Some might remember a little campaign I started in February. Its time to do it again, bit why now? The answer is very simple LibreGraphicsMeeting will be next year a little bit nearly a month earlier.

Additional to that some of the receiver of the campaign need a visa for going to Spain, where the next LibrGraphicsMeeting will be. They have to get the visa 6weeks before they enter the country so that would be end of February. And additional to that the have to show the tickets for the flights especially the back flight and the reservation of a hotel, pension or something similar. So we need the most of the money until that date or they can not go to the event.

This time there are three persons, I like to collecting for:
Gustavo Gonzalez, who is the author of Tupi – Open 2D Magic, a program for doing traditional 2D animations. If you take a look there are really not a lot of alternatives in this area in the FLOSS world, the only one would be SynfigStudio but that is to complicated. Tupi is easier to handle and to learn. In the last months Tupi made also a lot of progress, we tried to package it but it was totally wrong build dependencies like ffmpeg made it not possible to include it into Fedora. So Gustavo removed all that dependencies and structured it new, so that you can use it without ffmpeg and export the animations as ogv. But ffmpeg support is still available as plugin. There was also some other major improvements like a storyboard. I am sure when it is packaged (it’s really near I have a packaged version running) a lot of people will like Tupi, the Design Team cant wait for it.

Gustavo tried already this year to go to the LibreGraphicsMeeting in Vienna but it did not happen because he had no money for doing it. He like to present Tupi at that event and I am very sure that is useful for him and the development of Tupi. Gustav made a little video trying to explain, why he wants to go to the next LibreGraphicsMeeting. So lets help him.


Second person is Onyeibo Oku from Nigeria. Onyeibo is since a long time member of the Fedora Design team, but he is also active as Ambassador in Africa. Onyeibo sketches really good and he is good with Blender. For him is important to meet some other people from the design team and he wishes also to give a talk at LibreGraphicsMeeting.

Last candidate I might know, its Tatica again. She was, thanks to a lot of donations, at the last LibreGraphicsMeeting and learned a lot there and like to go again.

Because Pledgie and Paypal get each 3% of the sum, the sum would be 4080€/5300US$. Additional to that Paypal gets a small sum for each transfer, but that is hard to calculate. I calculated 80€/100US$ for that.

So what will happen if we get not the whole sum? When we reach the sum for the flight for Gustav, he will get it first, after that Onyeibo and last Tatica as she was already at LibreGraphicsMeeting. But we need the sum for the flights in February otherwise we get no visa for Gustav and Onyeibo. But hopefully we get the sum but that’s up on you. The Pledgie campaign can be found here.